In this week’s Beyond the Beans interview series, we talk to the man behind our most recent pour over YouTube video, Jaydon Charles. He has been working with Kéan Coffee for 6 years, taking on the roles of barista, roaster, and one of the Roastery managers. Jaydon grew up as a fan of Diedrich Coffee, drinking coffee as early as 3rd grade, and was not surprised to find himself diving into coffee behind the bar at our Tustin coffeehouse. He gives us insight into the roasting process and explains his passion for all things creative. 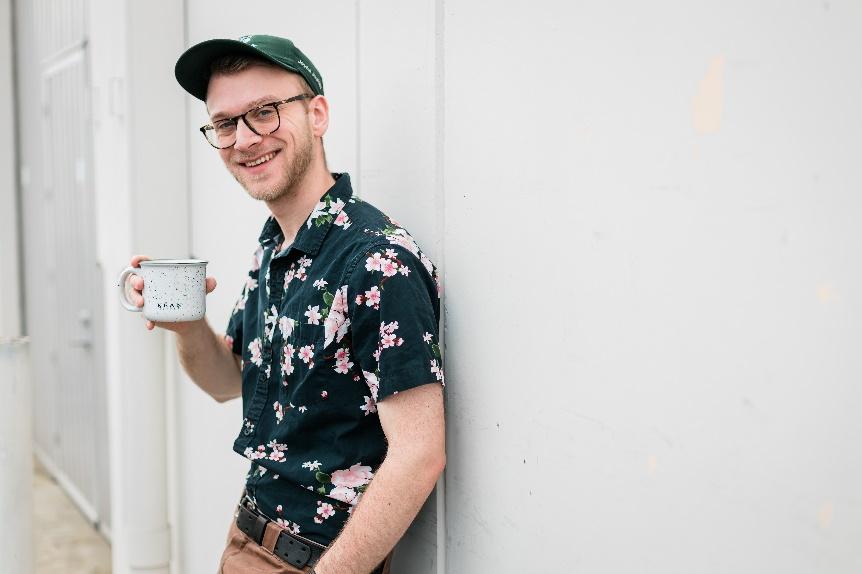 How does it feel to have started as a barista and now be a roaster? Did you intend to take that route when you were first hired as a barista?

Something fun to know is that my oldest brother, who looks a lot like me, started working at Diedrich Coffee at the same age that I would eventually end up beginning to work at Kéan Coffee. We have worked behind the same bar, at the same age, for essentially the same company, which is cool. I was always interested in roasting. What makes Kean Coffee cool is seeing the roaster in the coffeehouse. I was a fan of Kean Coffee from when it opened, which is what made me want to work here. I always knew about the Roastery and while really enjoyed the guest interactions at the coffeehouse, once I heard about the position opening up at the Roastery it sounded like something I would be even more interested in. I didn’t directly plan on working at the Roastery, but the task-driven environment makes it a really good fit for me.

Is there anything you miss about being a barista?

Yes, of course. I miss the guest interactions. Seeing daily regulars was always very nice. In the medial space of keeping up with drink tickets, it felt like every morning interaction was a step of progress in your relationship with this guest. You’re getting a snapshot of someone’s day, every day, for months. Also, the opportunity to run into individuals with the wild stories! I don’t have the opportunity for someone tell me a wild story while on my break anymore. One interaction that sticks out to me is that this one guest would change his name every day (and we have a few of those), but I was able to figure out the name started with the same letter as the day of the week’s letter. On Thursday he ordered a drink saying, “My name’s Ted”. On Friday, I told him “I’ll put your drink down as Fred”. He gave me a big smile and said, “Thanks.” I miss that sort of stuff. I also really miss doing latte art. We have the opportunity to practice on the machine here, but I can definitely notice my skills deteriorating.

What is your favorite aspect about roasting coffee and working at the Roastery?

My favorite part of working at the Roastery is the independence and being able to look at all the tasks of the day and figuring out the best way to tackle them. Also, it’s nice working with the same group of great people every day. My favorite part of roasting coffee is similar to latte art in that I do feel like it’s putting my own personal signature on things. Roasting coffee is not a super automated process. Inherently you start finding specific little things that you like to do, similar to choosing what latte art you put on a drink. I also enjoy the fact that the process of roasting coffee is constantly evolving—it feels a bit like the wild west to a certain degree. We see in the industry roasters releasing papers or studies on what they feel is the “best new roasting methods”. Reading what other people have to say is exciting.

Are there any coffees that are trickier than others when it comes roasting?

Yes. To preface, when you are roasting you have two main variables you can change in the roasting environment: how much gas your are giving the roaster and how much air flow you are putting into the roaster. Air flow is pretty straight forward. At the beginning of the roast you don’t want to give the coffee a lot of air flow because it’s like giving the beginning of a campfire too much air—it snuffs out. Toward the end of the roast, it’s also like a campfire in that if you don’t give it enough air, it snuffs out. Basically, throughout the roast you are giving it more air. Things become a lot more complicated and you can get very specific with the amount of gas you use in a roast. If you are trying to follow a roast curve, which is basically a precedent roast that establishes the curve you want to follow, with a coffee that is very high in moisture content you have to give it a lot of gas in the beginning but you also have to stop the gas a lot sooner. It’s like driving a cruise ship: you have to give it a lot of energy to get started and lot of time to get it to stop. A very dry coffee is more like a speedboat in that it is very easy to go and stop in a moment’s notice. There are a lot of little things that can affect a roast: the moisture content of the Roastery’s air, who else in our business complex is using the gas line… It just puts into perspective how much care goes into the coffee between the farmer and the tending of the coffee plants, the picking and the processing of the green coffee to roast, the roaster and finding the perfect curve using these variables, and the barista, who ultimately needs to pull a perfect shot using specific parameters and good, filtered water. It’s a craft.

You just came out with a new pour over video! It looks so good—and is so helpful! How long have you been doing video production? Do you have your own YouTube channel?

Thank you so much! I have been editing videos since high school, so almost 10 years now. I basically grew up without cable, so YouTube became my TV. I watched a lot of video game videos and play throughs, so it didn’t take long until I started recording myself playing games and uploading those to YouTube. Over 10 years I have made so many YouTube channels! Funny enough, there are two videos I am recording now that are for the first YouTube channel I ever made. My big claim to fame is an instructional video I made that got over a hundred thousand views and I got a couple hundred subscribers from that video. I have definitely shifted more towards making music videos recently and have been getting used to being behind the camera instead.

What other projects have you done? Are they all video related?

I am the worst when it comes to sticking to a single project. As soon as I get excited about one thing, I can be anywhere between the initial idea stage and almost being done before I already have another new idea to work on—I’ll have an idea for 3D printing and in the middle of that I’ll have an idea for a song that I want to produce… it’s cool because I feel like the millennial version of an all-purpose dad. You know, the dad who can put new brake pads on your car, fix the leak under the sink, the light on the ceiling—I am the media version of that. It’s hard for me to stick to one thing because I feel like I am more of an ideas person and I am just constantly a slave to whatever my newest idea is. I feel like ultimately, I would love to have a YouTube network in which I manage my own successful YouTube channel and boost other YouTube channels that I really like.

If you were given a million dollars to put toward a creative project, what would you do?

I would put $5 toward 200,000 different projects. Just kidding! I’ve actually had this idea for a while. I would get an office space where I can set up 5 computers all in a big circle: Five people could be working on their computers while also being able to interact and see each other. I would bring my friends in that I think are very funny and creative and start a YouTube channel or streaming thing where we don’t have any plans, more impromptu, where 3 of us can be recording content while the other 2 are doing social media or editing… we could all do something together and record that. That’s basically the idea: A group of friends that are locked in a room for 8 hours and everything is constantly recording, and you make videos out of it.

Has your coffee journey impacted your creative journey in any way?

Yes! There was an employee who worked here at the Roastery named Oliver, who had worked here and I knew of him in high school but didn’t actually get to meet him until he started working at the Roastery. We became friends really fast and then for his creative project, Morph Choir, I co-directed three of his music videos. That is a friendship I can’t believe I would have had without Kean Coffee. One of the music videos I made for Oliver is probably one I could single-handedly point to as a video I’m most proud of. It’s crazy with the timing of how life plays out, that video might have never existed. This job definitely allows for me to work my creative muscles. I am especially grateful for the opportunities I have to make something such as the pour-over video or to take photos for the company.

Thank you so much, Jaydon for sharing your creative energy with our team! Please be sure to check out his pour over video on our YouTube channel. Maybe even a like, comment, and subscribe? We’re sure that Jaydon already has new ideas brewing for Kean Coffee.

Interview conducted and written by Brittany Leslie on October 16th, 2020.